The tone is going to be a bit different for this one. If you’ve checked your App Store updates recently, you may or may not have seen me basically have a meltdown in the release notes. I owe you an update, an apology, and an explanation.

Let’s start on a high note:

I’m thrilled to have released Darkroom 2.1 a week ago. Here’s what was new:

We’ve listened to your feedback, and we’ve added the ability to edit (but not export…yet) TIFF files! In earlier versions of Darkroom, this was accidentally, half-way supported. In Darkroom 2 we removed this functionality, and were surprised by how many people edit TIFFs in Darkroom, so we re-enabled it. 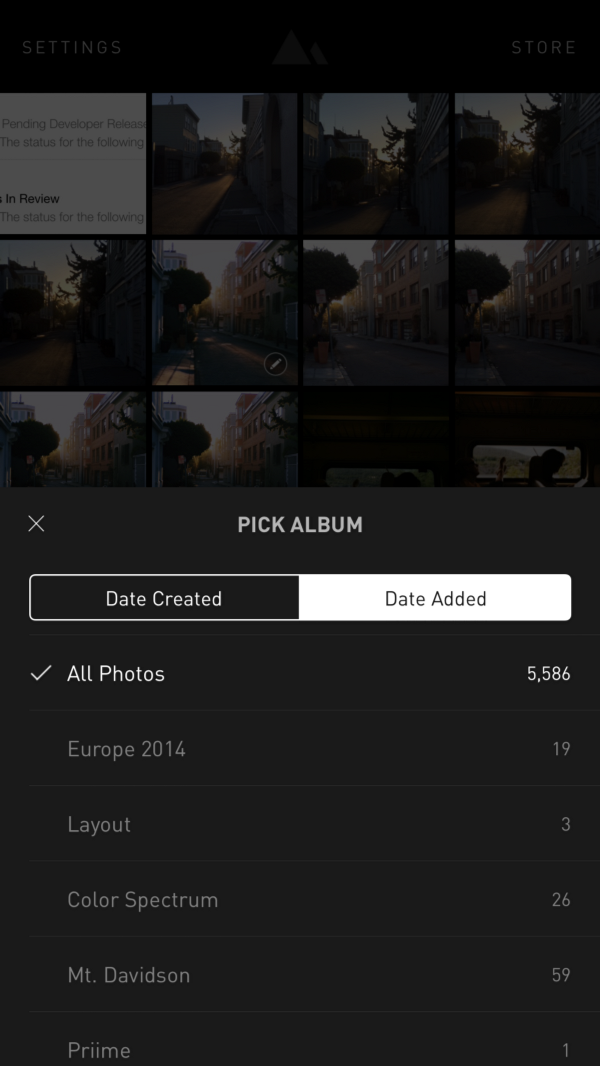 This has been personally frustrating me for a long time. When Matt and I were first developing Darkroom, we wanted to mimick the behavior of the Photos app. When iOS 8 came out, it turns out there are two feeds of your photos: Moments, and All Photos. One was sorted by the capture date, and one was sorted by the modified date. If you were editing an old photo and you saved a copy, its capture date was still old, so it was hidden in your library. Worse, if you added a photo to your iPhone that was captured earlier (Like, through Dropbox), those photos were also hidden in the list of photos.

Now, in the Album Selector, you have the option of sorting by Date Added, or Date Created (Still the default). The choice is sticky, meaning when you change it, that change will hold, even if you restart the app.

A lot of users reported that Darkroom was consuming large amounts of battery. That’s because for heavy users, the sliders were re-rendering the image hundreds of times over the course of a single adjustment. For fast phones, this isn’t a problem at all — The phone might get a bit hot, but it’s no biggie. On slower devices however, the devices were having trouble keeping up with the increased demands of Darkroom 2. So we added a new “Conserve Battery” setting that is on by default on iPhone 5, 5C, and 4S. When turned on, this setting disables the live preview of the sliders.

We encourage you to play with it. Over the course of this feature’s development, we were surprised how big of an impact it made on our editing process. By disabling the live preview, you’re able to see the before and after of each individual adjustment more clearly, since the change is not incremental.

Well, we released Darkroom 2.1 then this happened:

That, friends, is a graph of our crash rate. Guess when Darkroom 2.1 came out.

Anywho, turns out the code we were using to detect which device model you were using had a race condition that could cause slower devices to crash. Suffice it to say, your valiant knight got on the case, and promptly fixed the issue.

Now I can relax and celebrate, right?

The day after, I start getting reports of features being broken on iOS 9. Turns out, due to me being on vacation in New York City and then busy with another project I’ve been working on, I didn’t test iOS 9 as thoroughly as I should have. In fact, I didn’t do much testing, assuming that the lack of complaints from existing beta testers was an indication that there wasn’t a problem. That is a completely amateur mistake on my part, and I apologize for the inconvenience it has caused you in using Darkroom.

Anyway, Darkroom 2.3 fixes the blocking issues. There are still a couple of issues but they’re low-priority and I’m fixing them as I write this. Well, not at the same time, but you know what I mean.

I’ll send out an update in the next few days on the new project I’m working on, and it’ll explain why things have been a bit hectic. Thank you so much for using Darkroom. I love you.